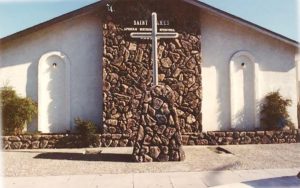 Edgar Middleton returned to San Jose in December of 1960 and started his dream. With help from his sister, Josephine Young, a niece, Mary Simpson and a handful of people, he began. Once organized, on April 13, 1961, prayer meetings and Bible Study were first held in the home of Mrs. Young. The group named the mission Searchlight. Later, the organization was called the San Jose Mission.

The first Sunday service was held at a Seventh Day Adventist building on Twelfth Street on August 13, 1961. The first persons to come forward to join the San Jose Mission were Josephine Young, Lina B. Hayes, Mary Simpson, John Lacey, Joann Simpson, Betty Young, Sarah Young and John Young. Maxine and Freddie Martin offered to work with these founding members until the mission was organized. At the time, there were 17 persons attending Sunday School. In July of 1962, the San Jose Mission was moved to a seventh Day Adventist gymnasium at 33rd Street and McKee Road.

Reverend James Miller, the church’s second pastor, served from August 1963 to August 1967. During his pastorate, the original church property at 1731 East San Antonio Street was acquired. Rev. Miller helped the members to become more organized. It was during his Pastorate that the Josephine Young Women’s Missionary Society was formed (1966).

Reverend-Doctor Herman W. Hyatt, Sr. served St. James for ten years, August 1967 to August 1977. There was much membership growth. In 1974 the church was renovated to include an add-on Sanctuary. It was during his administration, the owner of the property, Ms. Mitzi Briggs, forgave the balance of the mortgage and the property was formally secured in the name of St. James A.M.E. Church, Inc. The Usher Board, Lay Organization and Young People’s Choir were formed.

Reverend Norris L. Williams was the fourth pastor of St. James from August 1977 to December 1977. During this time Reverend Williams established Bible Study and stimulated interest in a more concentrated effort to increase the Building Fund.

Reverend Eugene Wright was the fifth pastor of St. James from December 1977 to August 1978. We continued to grow during his pastorate. He was the first full-time pastor. The Eight O’clock Worship Service was started. A sound system was installed. The parking lot was paved. The Helpful Few Club began.

Reverend Norris L. Williams was reappointed to serve St. James in August 1978, as its sixth pastor. He served until September 1980. The Young People’s Division became more active during this period and received Conference recognition for its large representation at Area Meetings.

Reverend Earl Anderson, the eighth pastor, served St. James from April 1983 to August 1989. Pastor Anderson brought maturity and stability to the membership. He established Prayer Meetings on Tuesdays at noon, organized and guided the Class Leaders, began instruction of the young associate ministers, and launched a community outreach program. Through his leadership we were able to move into a larger building on July 1, 1984, at 1916 East San Antonio Street. Shortly thereafter, the fellowship hall was made available for weekly alcoholic Anonymous meetings. The church was dedicated on January 13, 1985 by Bishop Henry W. Murph.

Reverend Carole Nelson-Ingram, the ninth pastor, served St. James from August 1989 to October 1999. During Rev. Nelson-Ingram’s ten years of service, the mortgage for the church at 1916 East San Antonio Street was retired, a Tutoring Lab was established and functioned for a few years, the Men’s Fellowship and Praise Dancers were formed. The children’s choir was reorganized as Singing for Jesus. The Junior Ushers were reestablished. Also during her tenure, the CATTS praise dancers were formed (children against tobacco and tobacco smoke) as a result of receiving a state of California grant funding anti-tobacco programs. These social outreach ministries also included HIV/AIDS projects. The Lay Organization honored the memory of Sister Brooksie Fleming by renaming its organization the Brooksie J. Fleming Lay Organization. The Lay sponsored monthly religious and Black History seminars, A.M.E. Discipline workshops and addressed pertinent general church issues as far as the connectional level.

In October 1999, the Reverend Norris L. Williams was given his third appointment to St. James, as its tenth pastor.

Reverend Billy Ray Taylor was appointed the eleventh pastor of St. James, serving from October 2001 to June 2006. During the first year of his tenure, Rev. Taylor accepted the responsibility of St. James hosting a District Conference. He readily accepted again in his third year after St. James faced the challenge with overwhelming success. Rev. Taylor supported the Lay Organization’s desire to sponsor a Church Retreat in which all members were challenged to develop goals and objectives for the next three years.

Pastor Andrew Rollins, the thirteenth pastor of St. James AME Church, was appointed in October of 2011, serving until October, 2016. Our partnership with Second Harvest Food Bank was started and it established St. James as an emergency food pantry site. The program has become an anointed outreach ministry, feeding families in the community. All auxiliaries and departments continued to function.

In 2022, our current pastor, Rev. Michael Porter, was appointed as the fifteenth pastor. He is providing a new spirit of renewal and revival in the church. The Wednesday night Bible Study, Vacation Bible School and Food Pantry are continuing and growing. We hosted our first Friends and Family BBQ luncheon with a school backpacks giveaway. The Lay hosted its first Black Jeopardy game in celebration of African American History Month. The church participated in a Reconnect Sunday through prayer and outreach to former church members. The Women’s Missionary Society continued its “Blessing Bags” donation to the homeless. Our Van Ministry was named The Potter’s Wheels. All auxiliaries and departments continue to function.

In October, 2018, Reverend Dr. Hugh K. Wesley was re-appointed as pastor of St. James. The church was honored to celebrate its 57th Church Anniversary with Bishop Clement W. Fugh as guest speaker. The Van Ministry, all auxiliaries and departments continue to function. The church is blessed with the continuation of Wednesday Night Bible Study, Vacation Bible School and the Food Pantry. The Lay Organization hosted a League of Women’s Voters Seminar and an African American History Month celebration with a Black Family Feud game and soul food dinner. The church hosted its second Friends and Family BBQ luncheon with a school backpacks giveaway. A Children’s Church has started with the attendance of the great grandchildren of one of our former pastor, Dr. Herman W. Hyatt, Sr. As St. James completes its 58th year in ministry, we are committed to sharing Christ, and making a difference in the lives of people. We press on with our faith in God.

As St. James is striving to draw and engage people by providing solace and solutions. We continue to fulfill our mission through being a spirit filled family, committed to sharing Christ, and making a difference in the lives of people. We press on with our faith in God.

Faith, Family and Fellowship – A Beacon of Light in the community since 1961